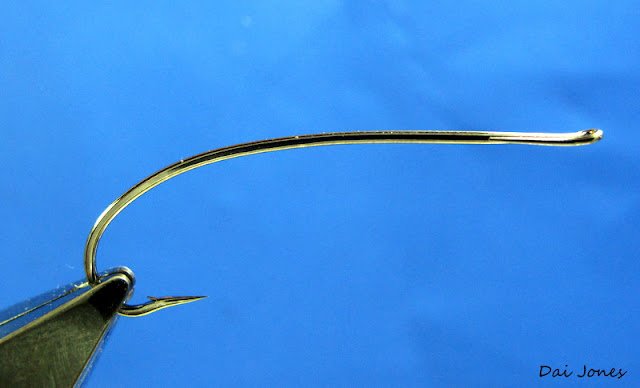 This is my take on the pattern Akroyd, but using a bronze mallard spey wing. although i also use the same pattern with a Dee, i do like it tied and fished this way. here i am tying the fly on a Blue heron size 3 hook. 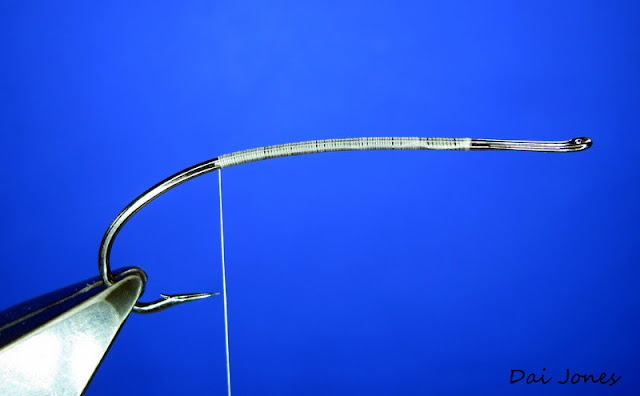 Now i tie in the thread at the head of the hook, and then run thread back down to the point of the hook. here i am using Danville thread 70 denier white, 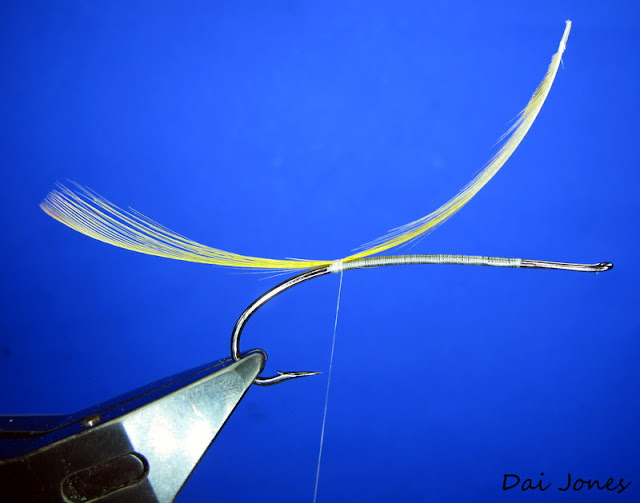 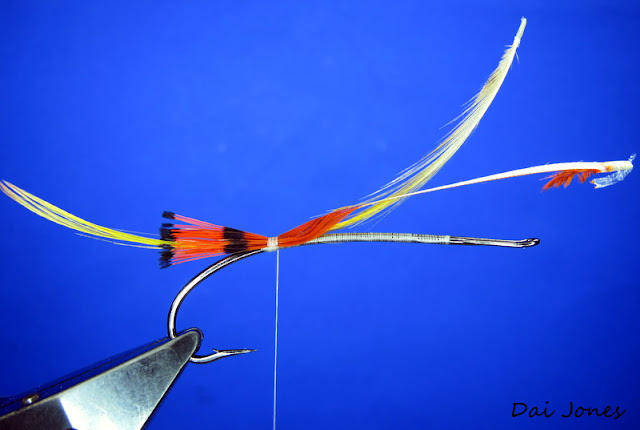 Here i have tied in Golden pheasant tippet feather, on top of the crest feather. 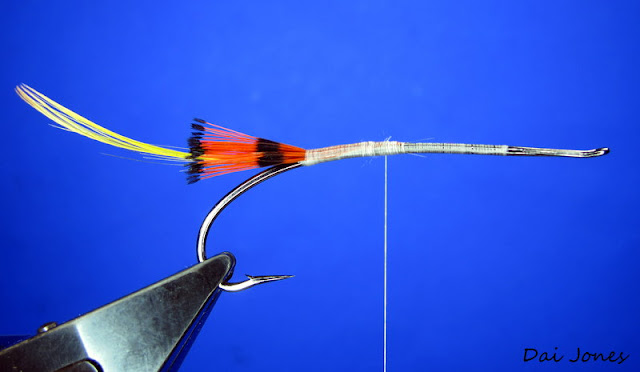 Here i have trimmed off unwanted material, and cleaned up with the tying thread. 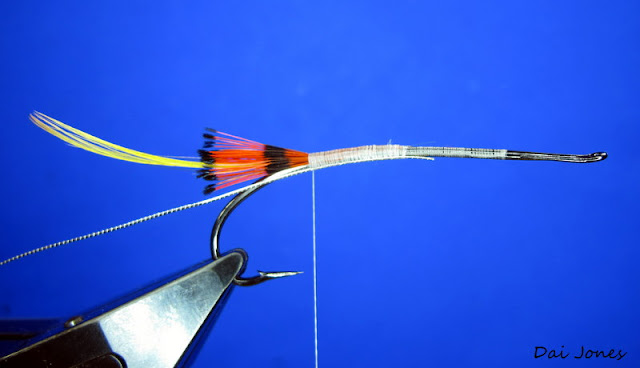 Now i tie in the rib, for the rear body. 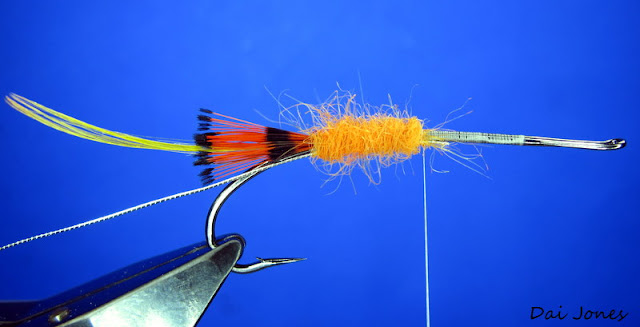 And here i have dubbed the rear body, with orange seals fur. 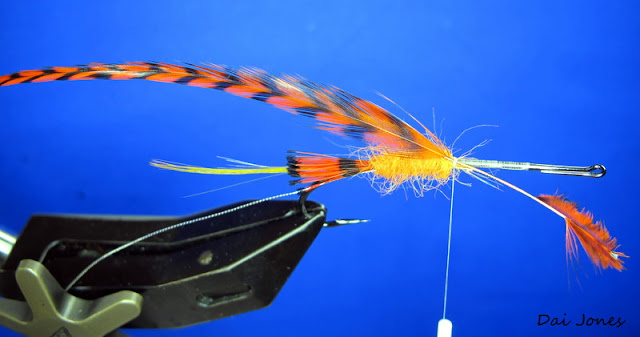 Now i tie in the rear hackle, to be wound over the dubbing. back down the hook to the point, 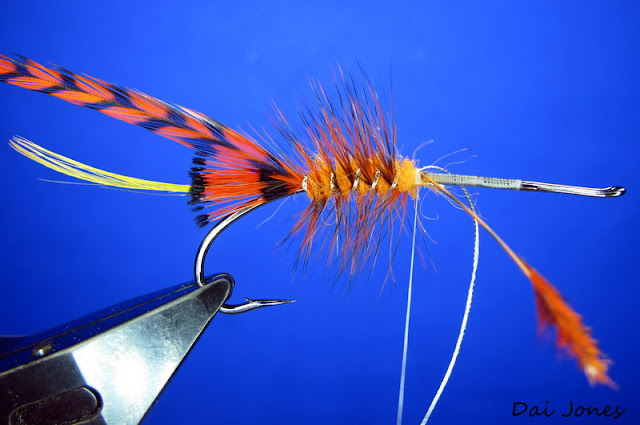 Here i have wound the hackle on, and over wound the rib back up hook. this is to lock in the hackle, 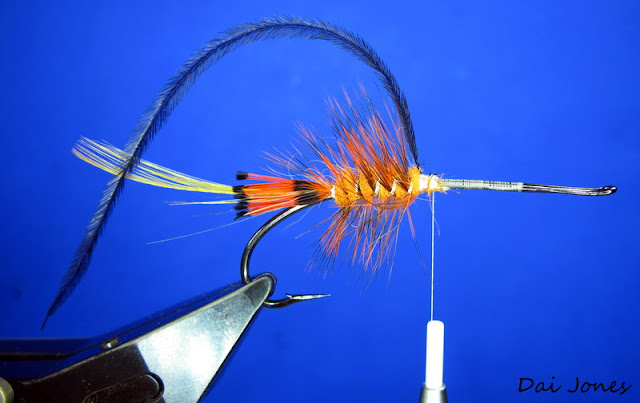 Now i tie in some Ostrich herl, for the join in the body. 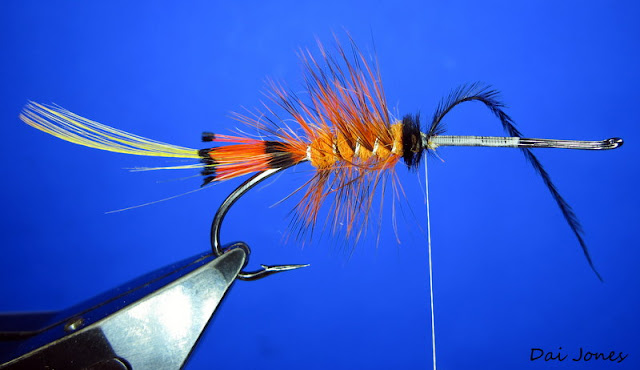 Here i have wound on the ostrich, and will trim off unwanted end. 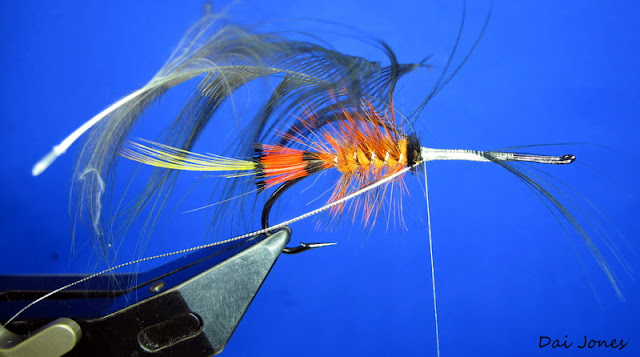 Now it is time ti tie in the materials for the forward body, here i have tied in the spey hackle and rib, 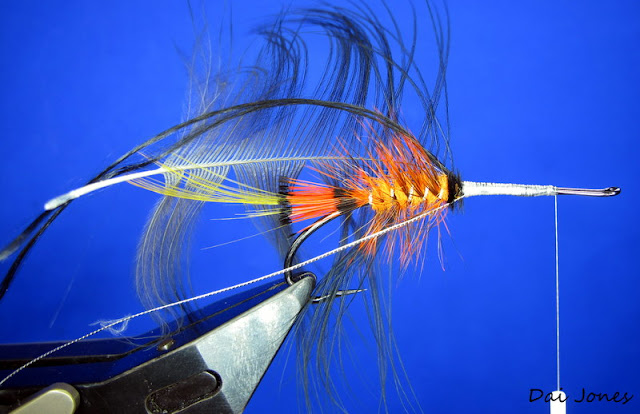 And here i tie in black floss, for the body. 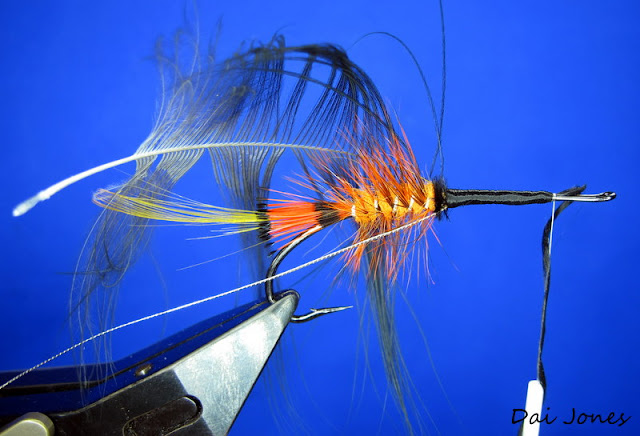 Now i have wound on the body floss, 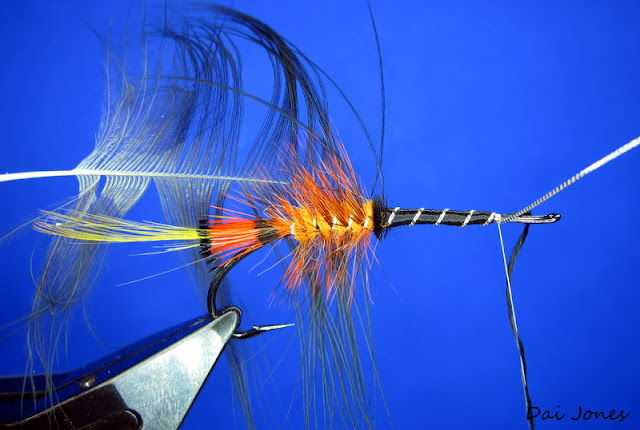 Now i wind on the rib, note i have done five turns as with the back ribbing. that is the norm with ribbing, 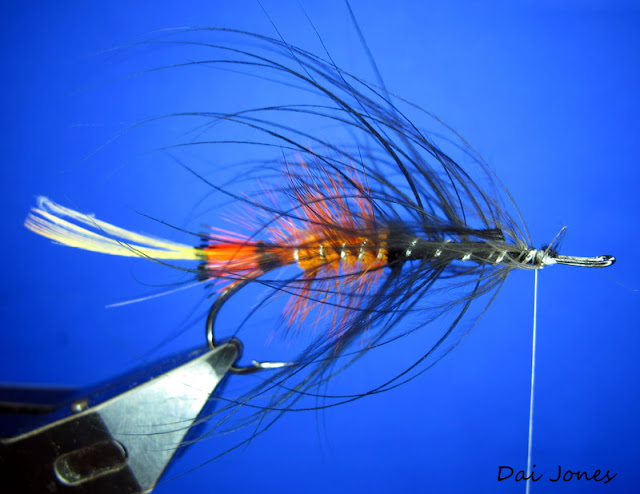 Now here i have wound on the hackle, tight behind the rib which is size medium. 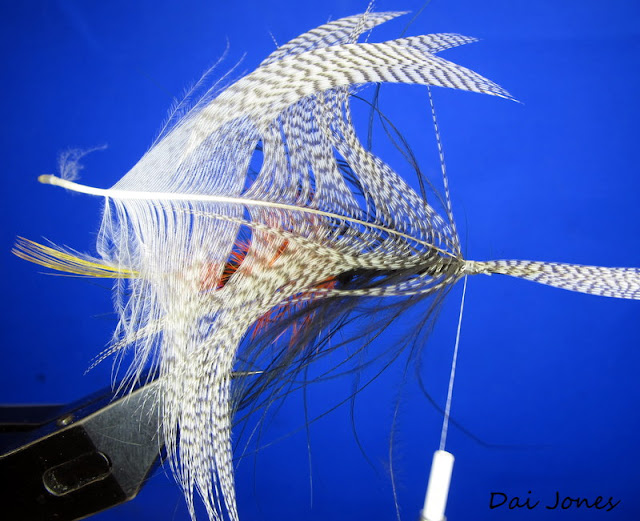 Now its time to tie in the collar, here i have use natural  mallard flank feather. 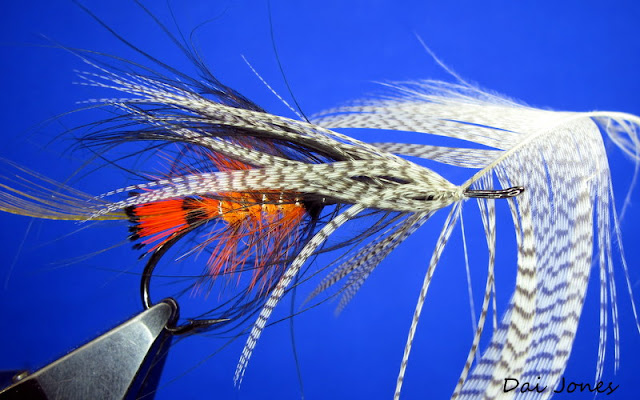 Here i have tied in the collar, and wound on three turns. 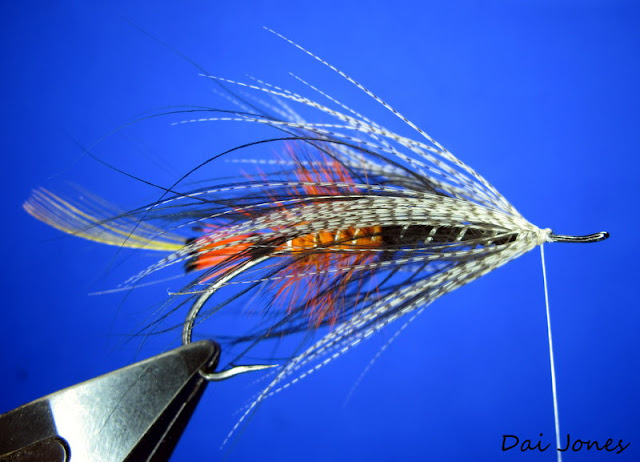 Here i have trimmed off unwanted material, 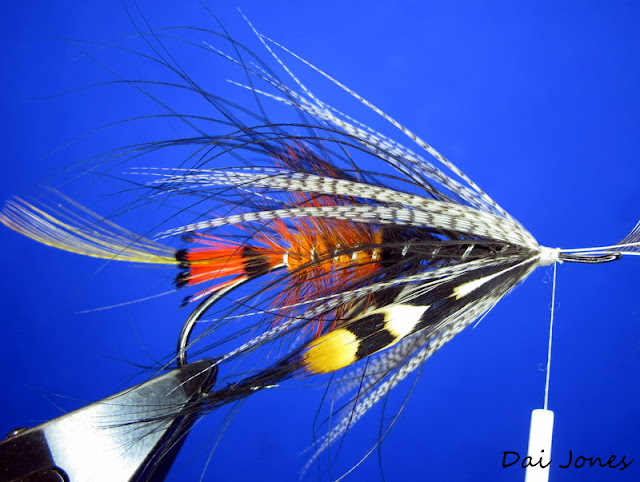 Now i tie in the jungle cock cheeks low, 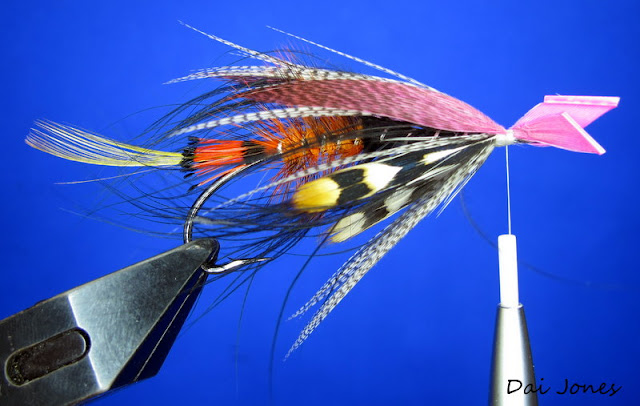 Now i tie in the wings, i always tie these in and leave the centre feather stem on. this will help to stop the the feather splitting when tying in, 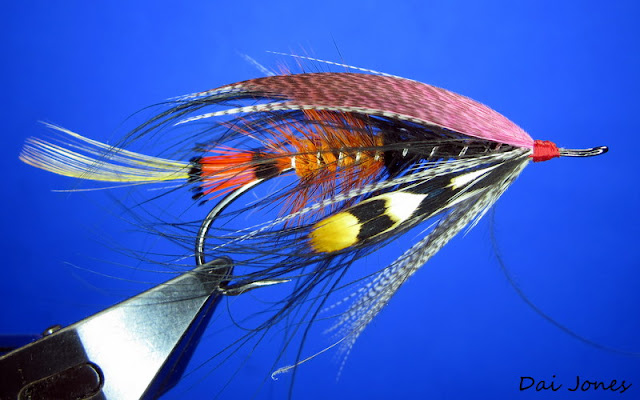 Here i have trimmed off unwanted wing material, 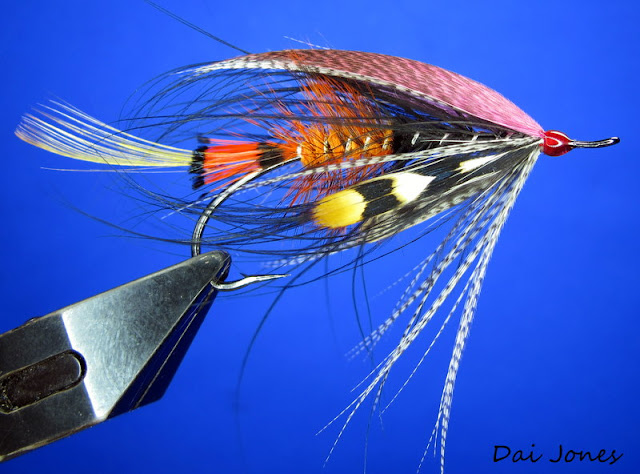 And above the finished fly, with a coat of varnish on head. 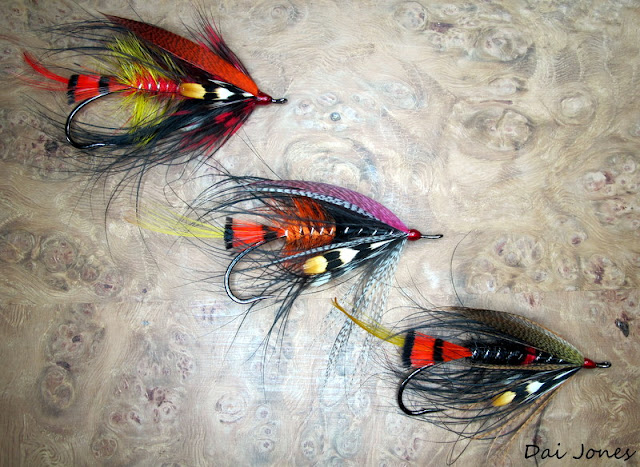 And above, some of the colors i use. orange/ pink & olive. 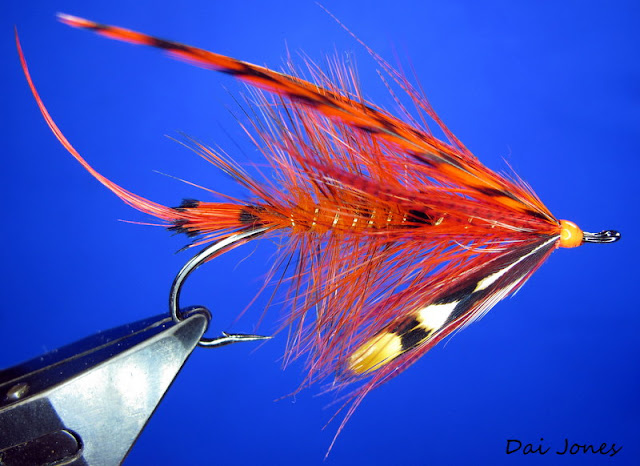 And here is another take on the fly, tied in all orange great for prawn / shrimp pattern, 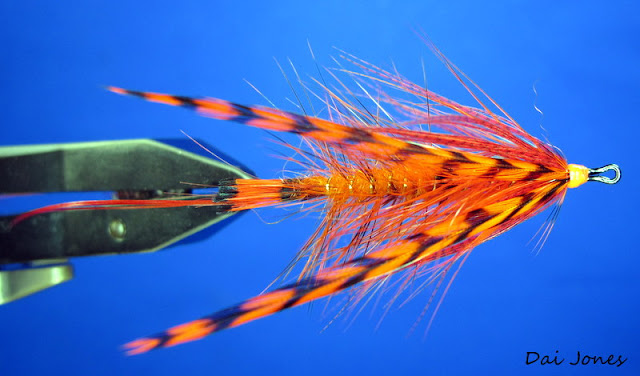 And here i have used slim genetic feather tips in orange, for the Dee wing i like these as they stand up better for casting and fishing.
Posted by daijones at 12:37